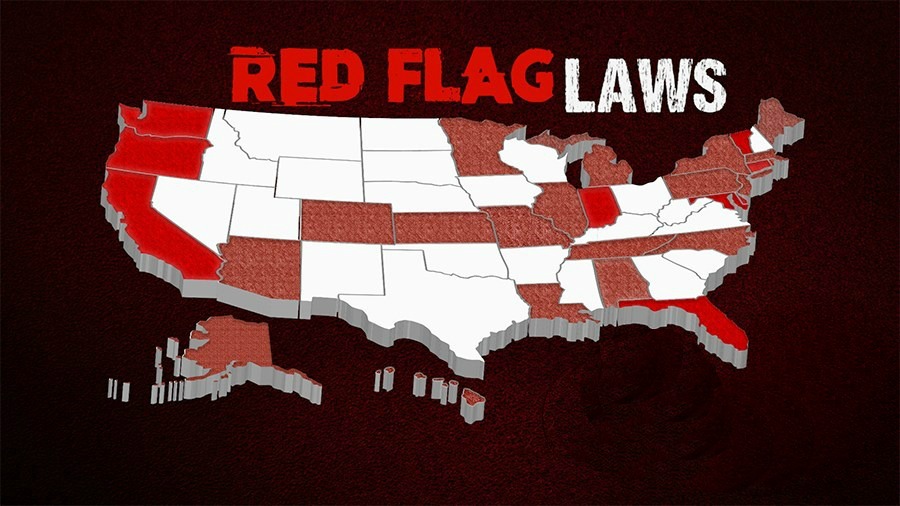 After every public mass shooting, the call for gun control reaches a new pitch.  Those on the anti-gun left have gone so far as suggesting banning nearly every modern day semi-automatic firearm and having police go door to door confiscating them.  And those on the right are calling for “Red Flag” Extreme Risk Protection Order laws in every state.

But is this really the answer?  The suggestion of a door to door gun confiscation would be laughable if these people were joking- but they aren’t.  How any politician believes using what they refer to as “weapons of war” to confiscate “weapons of war” will not turn into a war, is beyond me.  Even the anti-gun, Bloomberg funded website “The Trace” admits there are at bare minimum 20 million civilian owned, modern day sporting rifles in the US, and nearly all of them have never been used to commit a crime.

So what about “Red Flag” laws?  Let’s take a quick look at Red Flag laws and what they do…

“Red Flag” laws are also called ERPO’s or Extreme Risk Protection Orders, a term coined by the anti-gun movement to deter from the negative reputation that came with “Red Flag” legislation.  Don’t be fooled though, they are the exact same thing.  Red Flag laws have actually been around since 1999, although they are quickly rising in popularity.  In fact, Connecticut had a Red Flag law in place when the Sandy Hook shooting happened and California had one in place at the time of the San Bernardino attack, the Thousands Oaks shooting, and the Gilroy Garlic Festival shooting.

The proponents and mainstream media will tell you Red Flag ERPO laws allow family or law enforcement to petition the court to have the firearms removed from someone who is proven to be a danger to themselves or others.

To the general public, this sounds pretty benign, and polling reflects that when the law is presented this way.

But what if I phrased it this way: It’s a law that allows an abusive ex to petition the court, over the phone, for $0, to have the firearms confiscated from an individual they wish to disarm.  The petition is granted based on the lowest evidentiary threshold used in court, a preponderance of evidence (meaning there is a 51% chance that the accusation is true) and when the temporary order is issued by the court, it is coupled with a search warrant.  This means the first time the accused even finds out these proceedings are taking place is when the police are at their door ready to raid their home prepared to take away their means of self defense against the same abusive ex who requested the ERPO – and possibly the means of defense for their children.

Because that is exactly what these laws do.  It is legalized swatting that can be done by a laundry list of family members, former and current roommates, and anyone you have ever been intimate with.  Don’t believe me?  Read through the 30+ pages of HB19-1177 “Red Flag” Extreme Risk Protection Orders that was just signed by the governor here in Colorado.

There is a big difference between supporting the concept of a Red Flag law, and supporting the actual legislation that is being passed. The devil is always in the details.

But do they work?

Well, we already pointed out above three mass shooting in California with one of the broadest Red Flag laws (right behind Colorado’s), as well as Sandy Hook in Connecticut.  So, no, they didn’t work to stop killers in those instances and there is zero evidence they have thwarted any attacks elsewhere.

But what about suicide? Proponents will of course tell you yes, they work.  States like Indiana pointed to stats showing suicide by firearm was decreasing.  Well, turns out it wasn’t.  It was still increasing but not at the projected rate, so they consider that a win.  In addition, suicide by other methods has skyrocketed and Indiana has dropped from 19th in the country for mental health in 2011, to 45th in 2015, and in both 2016 and 2017 suicide was the tenth leading cause of death for all residents over all demographics, and the leading cause for certain demographics.  Their Red Flag law was enacted in 2005.

Why are we seeing these results?  Because these laws have nothing to do with mental health, and everything to do with taking away the guns.  The bill sponsors here in Colorado even admitted that during the month long debate before the bill passed by ONE SINGLE vote with every Republican and three Democrats voting against it.  Watch the video here:

These laws are widely opposed by law enforcement, as they realize the danger they will put their officers and citizens in, as well as the unconstitutionality of the law.  In Colorado, more than 50 of the 64 sheriffs opposed the legislation, as did the Denver and Aurora police unions.  The ACLU has opposed legislation in other states such as Rhode Island.  And people have been killed having these Red Flag orders served, such as happened in Maryland when a woman ERPO’d her brother after a family dispute. She later admitted she did not believe he would have hurt a fly, but he was killed when he refused to turn over his guns. Trading death for death is never the answer. The lives of gun owners do not matter less than the lives of anyone else.

We should also always remember in the “do something” era, passing feel good, knee jerk, virtue signaling legislation is a waste of valuable time and resources that could be used to actually DO SOMETHING, for example Maine passed a completely different proper adjudication law to address the same issue.  You can learn about that by listening to this podcast here.