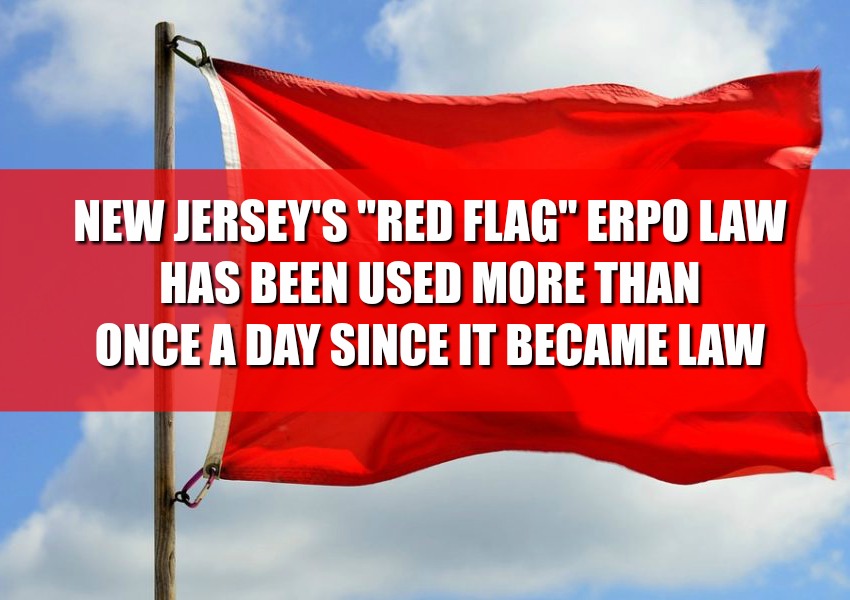 I’ve been an outspoken critic of these “Red Flag” Extreme Risk Protection Order ERPO laws that have been spreading across the nation like a cancer.  That’s not because I want to see guns in the hands of dangerous individuals.  I don’t.  But it’s because these new laws are so poorly and broadly written they are ripe for abuse and will put those who need protection the most at risk of being disarmed. Not to mention they are blatantly unconstitutional.

New Jersey’s “Red Flag” ERPO law went into effect Sept 1, 2019 – just two weeks ago.  According to data provided by the judiciary, it had been used 14 times by Friday, Sept 13.  Of those, twelve of the orders were temporary, and two were final orders granted by a judge after the gun owner had had a chance to plead their case in court.  It is unclear how many of those twelve temporary orders were awaiting a permanent hearing and how many had been dismissed due to false accusations.  That information has been requested.

Similar to Colorado, New Jersey’s law has been sold to the public by stating it allows family members or law enforcement to petition the courts to have the firearms removed from someone who is proven to be a danger to themselves or others.  And just like Colorado’s law, this is completely untrue. Honestly, after reading through New Jersey’s actual legislation, it might even be a more serious lie as no family members are listed as the people who can petition the courts.

Here’s what New Jersey has defined as a “Family Member”:

Colorado’s law allows all those same people to petition for an ERPO, but includes a multitude of family members including step-parents and step-children, and even in-laws.

Reading through New Jersey’s legislation, it’s obvious these new ERPO bills are being written by the same lobbyist.  Here are the similarities to what was passed in Colorado and will go into effect January 1, 2020:

• It’s free to file the petition. Nothing in the court system is free to file, and even a $10 filing fee would deter those using it as an act of revenge.
• The petitioner/accuser does not have to be present at either the temporary hearing or the permanent hearing, and the judge will base a decision off an affidavit of information.
• The party being accused is not informed of the proceedings and has no opportunity to defend themselves until after the firearms are confiscated.
• The temporary order is coupled with a search warrant. This means the very first time the party being accused is aware this is happening the police will be at their door, warrant in hand, ready to raid their home and take their guns – possibly even their life if there is resistance.
• Accusations of threats do not have to be firearms related. Someone can say they want to punch someone, and that is evidence enough to grant the order.
• There is no punishment for false accusers.
• There is no mental health component. Once the firearms are taken, forcibly if necessary, the person is left in crisis – something I find downright cruel to those who are truly in need of help.  The only time mental health is mentioned in both New Jersey’s and Colorado’s legislation is when discussing lifting the order and returning an individuals guns. In this section it’s stated mental health treatment could be one of the deciding factors.

Unlike Colorado’s law which requires an automatic expiration hearing after 364 days, New Jersey’s law is indefinite.

The new laws differ greatly from Red Flag laws that have been in effect for many years.  For example Indiana has had a Red Flag laws since 2005, and it requires a corroboration of evidence to even start the petition.  Connecticut has had one since 1999, and it requires a mental health professional to be part of the petitioning process.  That said, even those laws have been proven to be ineffective as Sandy Hook happened while Connecticut’s law was in place, and Indiana’s law may be having the opposite effect on suicide.

Who do you think is actually writing these Red Flag bills?  Let us know in the comments.