On the heels of three shocking mass shootings in the United States in the past month, we’re once again bombarded with stories from mainstream media with headlines like “There have been more mass shootings than days in 2019” or “The El Paso shooting is the 249th mass shooting of 2019”.  The media loves to make evil people famous. These stories quickly go viral and concerned citizens start calling for more gun control, as if almost on cue. I can’t say I blame them. If I thought what happened in at the El Paso, Texas Walmart had happened every single day in this country over the past nine months, I’d be pretty freaked out too!

On September 1st, 2019 – the day after the heartbreaking Odessa, Texas shooting rampage – CBS News, Insider News, KUNC, and several other mainstream news outlets released articles claiming that there have been anywhere from 283 to 313 mass shootings in the United States during 2019. I decided to look into this and what was found surprised even me.  The American people are being grossly lied to – and they should care. 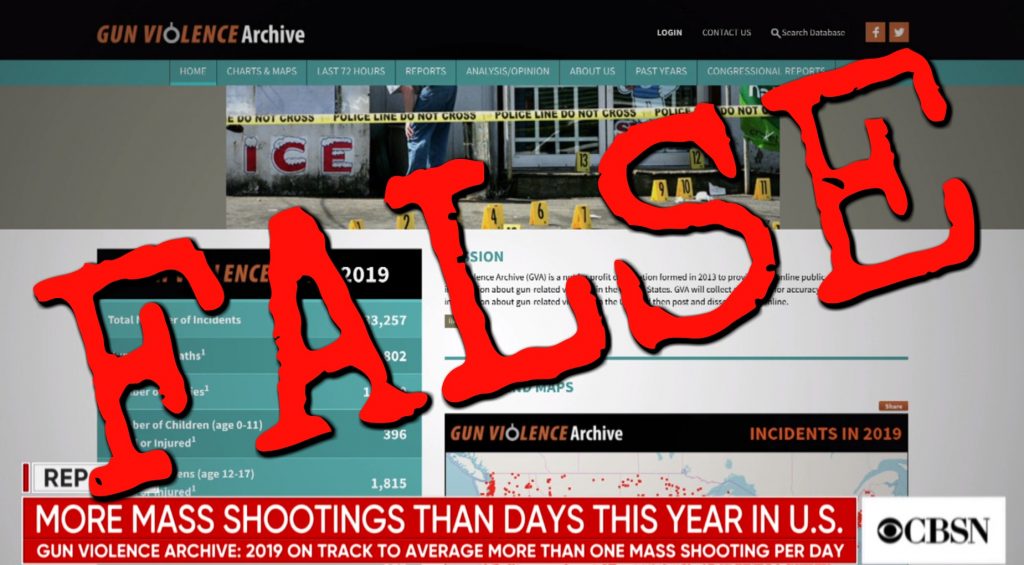 In order to determine how many mass shootings there are, we need to know the definition of a mass shooting. Finding that definition seems easy enough, right?  Think again.  There are actually many definitions of “mass shooting” and most seem to be arbitrarily made up to fit the narrative an organization or publication wishes to push.

Mother Jones defines mass shooting as: “Indiscriminate rampages in public places resulting in four or more victims killed by the attacker, excluding the death of the attacker.”

The Gun Violence Archive defines a mass shooting as: “Four or more shot or killed, not including the shooter. They also do not remove any subcategory of shooting – meaning they don’t exclude, set apart, caveat, or differentiate victims based upon the circumstances in which they were shot – including crime, gang activity, and domestic/familial incidents.”

The “experts” at Reddit have decided to make up their own definition, therefore Reddit defines a mass shooting as:  “Four plus people injured or killed by firearm, including the gunman.”

Finally we come to the Congressional Research Service’s definition: “The incident takes place in a public area involving four or more deaths—not including the gunman, the shooter selects victims indiscriminately, the violence in these incidents are not a means to an end.”  It should be noted that CRS breaks up shootings involving four or more individuals as public, familial, and felony (robbery, gang activity, etc).  This is because the motives behind each vary greatly.

To make matters even more confusing, the FBI has separate definitions for “mass murder” and “active shooter”.

There are several inconsistencies between each of these definitions. For such a severe issue that allegedly only occurs in the United States, why do we not have a universal definition for this type of event? And why is it the government can agree on the definition, but the gun grabbers won’t use it?

For the sake of this investigation, we used the definition put forth by the Congressional Research Service.  The CRS’s website explains that it “works exclusively for the United States congress, providing policy and legal analysis to committees and members of both members of the house and senate, regardless of party affiliation.” The website further explains that the CRS  is a “shared staff to congressional committees and members of congress. CRS experts assist at every stage of the legislative process.” To put it simply, congress uses the CRS’s research to develop policy and create laws.

Now that we’re “armed” with the facts we need, lets dissect the statistics being pushed by the media.

The stats used in the news sources cited above stating there have been 283 mass shootings thus far in 2019 are from the Gun Violence Archive.  Okay, let’s look a little deeper into the GVA. The mission statement on their website states it is a “non-profit corporation formed in 2013 to provide free online public access to accurate information about gun related violence in the United States.”  It should be noted this organization is tied to the Gun Violence Memorial, who includes perpetrators and even most recently the Odessa, Texas and Dayton, OH mass shooters, as gun violence victims because they were killed by firearm, even though justified.

We dug into Gun Violence Archive website’s “mass shooting” report for 2019. We filtered the list by lowest deaths to highest. Immediately 10 out of the 12 pages were disqualified, as there were between 0 and 3 deaths per incident. That means right away, 272 incidents out of 294 do not qualify as a mass shooting by definition. In fact, 148 of these incidents resulted in zero deaths.

That leaves only two pages to dig through. The most common theme with the remaining list of incidents is that they were primarily either family or domestic violence related, or drug/gang related. Using the definition used by the CRS, that removes all but nine shootings that actually count as a public mass shooting. Yes folks, there have only been NINE mass shootings this year in the United States – not 283.

Nine mass shootings compared to 283 is a substantial difference. The media easily plays off the ignorance of the public, taking advantage of the fact that there is not a universal definition of “mass shooting”, and blowing up an issue that desperately needs cured, but solutions are not found with half truths and intentionally misleading information.

Here are those nine:

(In an effort to not publish the shooters names, we are not including that information. But a quick search by date and location here will provide more details into these events.)

This clearly shows that the media has a blatant disregard for the truth.  They either have an ulterior motive in what they report, or they are too lazy to verify what is being given to them.  It’s likely a bit of both, but the former is rather frightening.  They are manipulating the general populace by creating hysteria through a skewed mass shooter narrative. This in turn will influence public opinion, and ultimately public policy. Additionally, combining domestic violence and gang/drugs into public mass shootings is irresponsible. Each of these need addressed, but the motives are so different, which means the answers are too. Grouping it all into one term is as much an injustice to the victims and potential victims as grouping suicide into “gun violence.”