On Monday Feb 25th, journalist Anna Staver over at the Denver Post released an articled titled “What Colorado can learn from “red flag” gun laws in other states as lawmakers debate passing their own version”.  This article discusses how the opposition and support for Colorado’s proposed “Red Flag” Emergency Risk Protection Orders (ERPO) bill varies, as well as goes into some detail about the effects of this law on other states.

The bill being considered in Colorado, HB19-1177, passed the State House Judiciary Committee last Thursday after nearly ten hours of testimony for and against it.  The opposing sides continued to testify well into the night, with dozens of gun rights activists being called well after they had left.  Had they all stayed, testimony undoubtedly would have continued into the early morning hours.  The bill will be heard in the House Appropriations Committee this week where no public testimony will be taken, and it is expected to pass.  It could see a vote of the full House Chamber as early as next week.

Proponents of this bill are arguing it as a “suicide prevention measure”, as threat to harm self is one of the reasons for firearms confiscation allowed in the bill.  Never mind the chilling unintended consequences this law would have on those who are feeling suicidal – such as fear of reaching out for help, and escalating an already distressing situation.  But the suicide facts Ms. Staver used in her article are wrong on their face.  Here’s what her article says about suicide:

Suicide is the leading type of gun death in the United States, according to the Centers for Disease Control and Prevention. And supporters of Colorado’s extreme risk protection order bill claim it would prevent some of those deaths from happening in the Centennial State.

“What we are doing with this bill is giving law enforcement a tool that they need to save lives,” said Rep. Tom Sullivan, D-Centennial. “The majority of the time it’s going to be someone who is going to do harm to themselves.”

The data supports Sullivan’s assertion that if Colorado allows extreme risk protection orders, the majority of cases will involve suicidal ideation. About 80 percent of the gun seizures in Indiana and 60 percent in Connecticut arose from concerns about suicide.

But did removing those guns prevent violent self-harm?

Aaron Kivisto, a professor of clinical psychology at the University of Indianapolis who studied suicide rates in both states, said the answer is yes in Indiana and no in Connecticut.

But he found something else in Connecticut: An uptick in non-firearm suicides meant the overall suicide rate was essentially unchanged.

He said he doesn’t know why the two states got two different results, but one possible explanation is the cultural differences between them.

“Taking the gun isn’t the end of the situation. It doesn’t reduce the crisis,” Kivisto said. “It leaves someone in a crisis without a gun.”

Rally for our Rights supporter and gun rights activist, Mario Acevedo of Denver, thought the Indiana numbers didn’t seem accurate.  So he did his own research.  He found that not only were Ms. Staver’s numbers inaccurate, but they were wrong on the white paper she referenced. 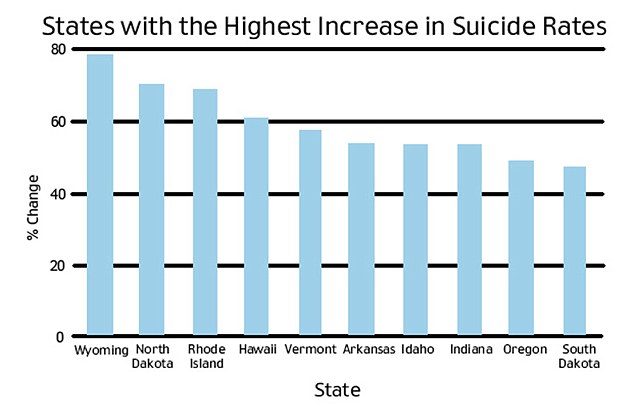 Here’s the letter Mario sent to Ms. Staver and the Denver Post.  I repeated the same research Mario had done on the CDC’s website and came up with exactly the same numbers he did.  Indiana has one of the fastest increasing rates of suicide in the nation.

In your article “Colorado can learn “red flag” lessons from red states,” you mentioned that professor Aaron Kivisto found that Indiana saw a 7.5 percent reduction in gun suicides following the 2005 adoption of their “red lag” gun confiscation law. That sounded off to me since Indiana is a state hit hard by the opioid epidemic and suicides are an unfortunate consequence of such drug abuse. According to the Centers for Disease Control:

I don’t know what numbers or methodology Kivisto was using but his findings appear to be completely bogus. You are more than welcome to confirm my numbers at the CDC WISQARS Fatal Injury Reports.

My issue with red flag laws is that there’s a lot of hand waving over the results that cause me to question the purpose of such law. Effective policy, in this case to reduce fatal self-harm, must be based on reality and facts, not simply good intentions or wishes.

Think they’ll bother to do the research themselves and correct this glaring inaccuracy?  We really shouldn’t have to fact check the fact checkers.

Mario also contacted the author of the white paper, Aaron Kivisto.  Mr. Kivisto did respond!  But his response gave us a big WTF?  Basically they decided the rate of suicide has decreased because it’s lower than what the projected rates were had the bill not passed.  Do these people have a crystal ball?

Thanks for your email. You’re absolutely right that in absolute terms suicides have increased. Our study approached the issue not in terms of absolute reductions, however, but in terms of reductions from the number of suicides that would have been expected in each state had the lot not been passed. In other words, our statistical approach utilized a technique known as the synthetic control methodology. It’s an approach developed by MIT economists to study the effects of policy changes and is currently considered among the most robust methods available to study the impact of policy change. In short, the approach provides a counterfactual – that is, an estimate of what the suicide rate would have been in Indiana had they not enacted the law, as well as in Connecticut had they not enacted the law. These estimates are compared to observed rates, and reductions represent the difference between these estimated and observed values.

I hope that this is helpful.

We here at Rally for our Rights certainly don’t take suicide lightly.  In fact, many of us including myself and Mario have lost loved ones to suicide.  It’s an issue near and dear to our hearts.  Which likely makes this even more infuriating.  Suicide is a serious problem in society and manipulating stats to pass bad legislation is despicable.

Watch this testimony given by 19 year gun rights activist, Haley Marcantonio, during the Red Flag ERPO hearing last week.  What she doesn’t mention in her testimony is her family has been personally touched by suicide, as many of ours have.  The anti-gun community does not get a monopoly on suicide.  This issue has touched millions deeply.