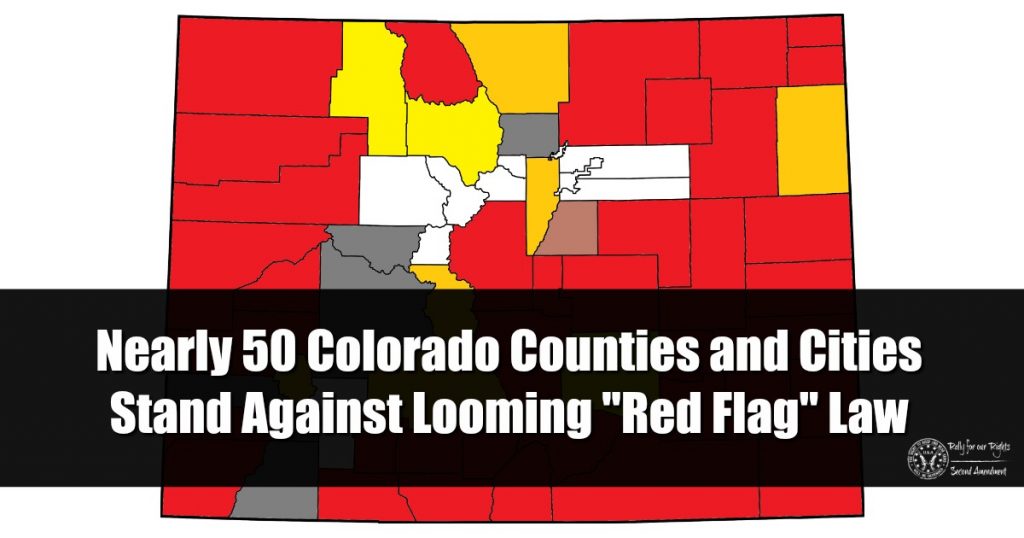 Recently we reported when two Colorado counties passed resolutions declaring themselves Second Amendment Sanctuary Counties, and since then that number has grown to over half of Colorado’s counties that have either passed a resolution or are poised to pass one at an upcoming meeting.  In addition, both the Denver and Aurora Police Unions expressed their opposition in a press release.

Wondering what a Second Amendment Sanctuary County means?  In nearly all of these instances, these efforts are being led by the county sheriff, then joined by the county commissioners, who say no county funds will be used to process ERPO’s or store confiscated weapons, and that the right to keep and bear arms extends to all citizens of the county.  How far will YOUR sheriff go to not comply should HB19-1177 become law?  Well, it varies and I’d suggest asking them yourself for more specific clarificiation.

Here’s the scoop on the current list of Second Amendment Sanctuary counties:

These municipalities have joined with their counties: 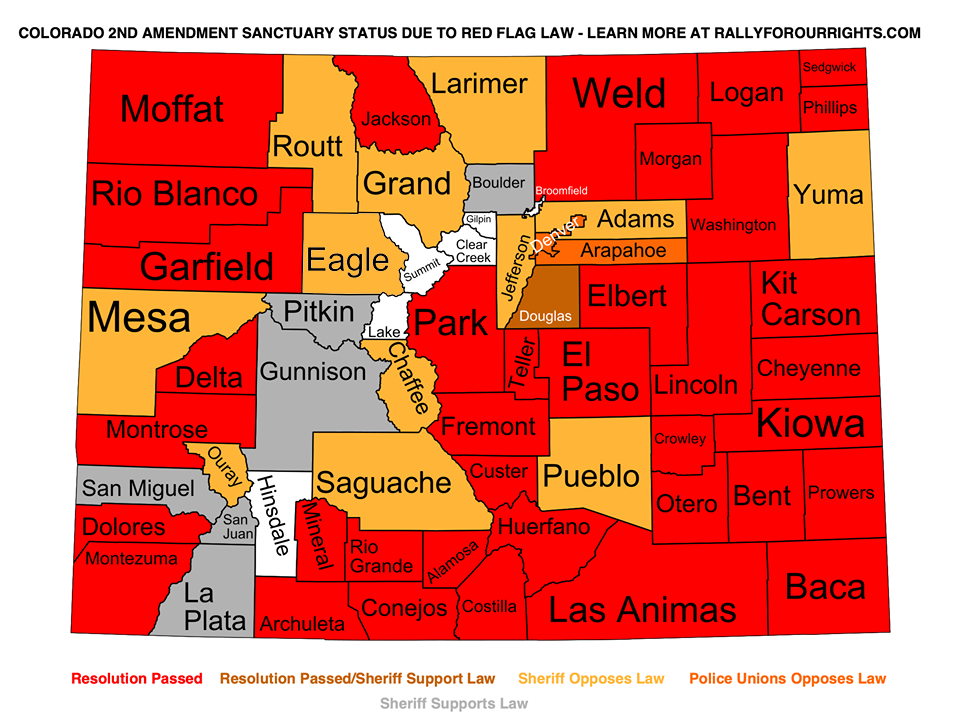 The following counties are considering implementing similar resolutions or their sheriff is in opposition:

Adams County Sheriff Rick Reigenborn stated on Facebook that he has not been up to speed on the Red Flag Bill, but upon further review he agrees Sheriff Reams brings up a lot of important issues, and as written, he opposes the bill as well.  He believes there are many flaws.

In Eagle County the sheriff came out the day the governor signed the bill with a very thorough analysis of why he is now in opposition of the legislation as written.  That can be found here.

The Routt County sheriff has publicly stated that he supports the concept of a Red Flag Law, but finds HB19-1177 deeply flawed with many potential problems.

The Ouray county sheriff is against the bill.

In Saguache county, the sheriff has asked the citizens to contact their county commissioners requesting they pass a Second Amendment Sanctuary resolution.

Grand  County Sheriff is in direct opposition of Colorado’s Red Flag law, calling it unconsituational, and the county commissioners echo his concerns.  They are determining what to do next.

Yuma County Sheriff T.C. Combs is working with the Yuma County Commissioners to pass a resolution making their county a Second Amendment Sanctuary.  They are currently awaiting legal advice before moving to the final vote.  All three county commissioners support the resolution.

The Chaffee county sheriff said at state senator Kerry Donovan’s town hall that he is in complete opposition of Colorado’s Red Flag bill, and he joined with the commissioners to draft a letter to the legislature pointing out 14 very specific issues with this legislation. The commissioners side stepped the issue at their recent meeting and moved the issue to a public forum.

Rose Pugliese, chairwoman of the Mesa County Board of Commissioners, said her board passed a comprehensive resolution in 2013 supporting the Second Amendment and she plans to present the newest resolution to the entire board of commissioners in the coming days.  The Mesa County Sheriff has also come out in strong opposition to the Red Flag legislation currently being considered.

In Larimer County, Sheriff Justin Smith has publicly stated his opposition to the current version of the Red Flag bill, and all three county commissioners (including Democrat and former State Senator, John Kefalas) have issued a letter to the Senate asking them to oppose this bill.

Jefferson County Sheriff Jeff Shrader is also in public opposition to HB19-1177.  The Board of County Commissioners have yet to make a statement.  I will reach out to them as well.