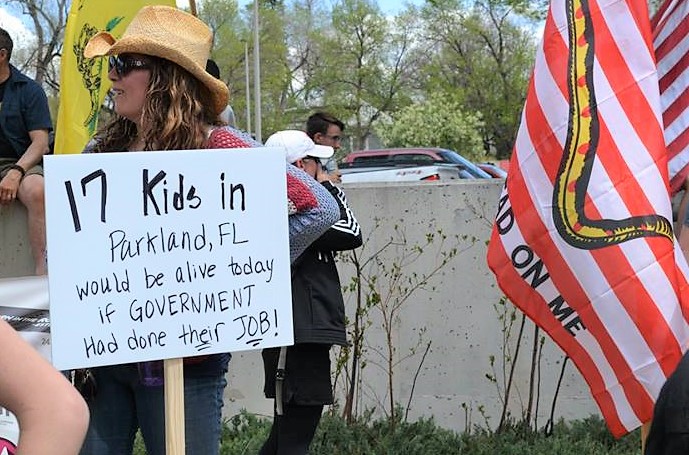 Today marks one year since the United States saw a school massacre that broke the hearts of a nation, ignited a fire in new activists, and if you’re paying attention – shattered your trust in government.  That massacre being the Parkland, Florida school shooting where 19 year old Nikolas Cruz took the lives of 14 classmates and three teachers.

On February 14th, 2018 Nikolas Cruz took an Uber with a backpack equipped with an AR-15, grenades, and ammo to his old school.  He walked past the school security monitor, Andrew Medina, who knew he wasn’t allowed on school grounds and found his presence “suspicious”, although did nothing.  Cruz walked past the building where school resource officer, Scot Peterson, was talking with another student.  Peterson was employed as a sheriff’s deputy with the Broward County Sheriff’s Department, but his charge was to protect the students at Parkland High School.  It should also be noted that Peterson was the only armed person permitted to be on school grounds.  Cruz walked through the unsecured school doors into his former high school from which he’d been expelled.  In this gun free zone not one person attempted to stop him, nor was there any security measures in place.  At 2:21 pm he opened fire.  It was a rampage that would last at least 20 minutes before Cruz simply walked out of the school and into a nearby neighborhood, where he was eventually captured and confessed.

Heartbreaking.  How can this kind of tragedy happen?  It shouldn’t have.  And it wouldn’t have if the government had done their job.

The Parkland High School Shooting spurred a gun control movement this country hasn’t seen in decades.  March for our Lives formed under umbrella groups Moms Demand Action and Everytown For Gun Safety, all which are funded by Michael Bloomberg, have taken to the streets and the halls of congress.  Frantic and misguided students, parents, teachers and individuals have exploited the Parkland tragedy calling for massive gun control across the nation – from city ordinances to federal laws.  What they should be acknowledging instead is the complete and utter government failure that allowed Parkland to happen in the first place. More laws were not needed. The current laws simply needed to be enforced.

The government has blood on their hands, and as a mother I say that unapologetically.

• Nikolas Cruz was not a stranger to Broward County law enforcement.  In fact, police had been called to his home at least 37 times over the course of only a few years. 37 TIMES!  The reasons ranged from harming animals (shooting chickens with a pellet gun), assault on his mother, assault on his siblings, harming himself, threatening to harm himself, threatening to harm others, and more.  Not once was he charged.  Not once did the police take any action, even though action on almost all of these would have required his name to be entered into the NICS database preventing him from legally being able to purchase a firearm.

• In addition to the 37 reports law enforcement did follow up on (although ultimately ignored in the end), in February 2016 a tipster called Broward Sheriff’s Office to say Cruz ‘could be a school shooter in the making’ and had been making threats on Instagram, but deputies did not write up a report on that warning, instead they forwarded it to School Resource Officer Scot Peterson. That report came just weeks after a relative called urging Broward Sheriff’s Office to investigate if he should have the weapons he had, and possibly seize them.  In the end, both reports were ignored.

• Late in 2016 a “peer counselor” reported to School Resource Officer Scot Peterson that Cruz had possibly ingested gasoline in a suicide attempt, was cutting himself and wanted to buy a gun. A mental health counselor advised against involuntarily committing Cruz.  In Florida, such action can be done under the Baker Act, which allows the state to involuntarily commit individuals deemed a threat to themselves or others. People committed under the Baker Act are legally barred from obtaining firearms.  This event was followed up on by Florida Department of Children and Families, and even though he had fresh cuts from “cutting” and his mother shared her fear that he constantly talked of wanting to buy a firearm, he was deemed stable and, once again, ignored.

• In September 2017 a YouTube user named “nikolas cruz” postsed a comment stating he wanted to become a “professional school shooter.” The comment was reported to the FBI in Mississippi, but was not followed up on.

• In November 2017 a family member called Broward County Sheriff’s Office to report that Nikolas Cruz was dangerous, had made legitimate threats, and had weapons.  Her concerns were ignored when Cruz told them he’d give the weapons to a family friend.  This again would have been a legitimate use of the Baker Act.

• Also in November 2017, after Cruz’ mother died, he was taken in by a Palm Beach County family.  They contacted the Palm Beach Sheriff’s Office to report a fight between Cruz and their 22 year old son. A member of the family said that Cruz had threatened to “get his gun and come back” and that he had “put the gun to others’ heads in the past.” The family did not want him arrested, so the report was ignored.

• And again in November 2017 a caller from Massachusetts reported that Cruz is collecting guns and knives and was threatening to be a “school shooter in the making.” A Broward County Sheriff’s Deputy advised the caller to contact the Palm Beach sheriff.  If the caller ever did contact Palm Beach, it’s not on record.

• In January 5, 2018 a report came in to the FBI’s tip line claiming that Cruz has “a desire to kill people” and could potentially conduct a school shooting. The information was never passed on to the FBI’s office in Miami.  The FBI has even publicly acknowledged their failure.

And these are only the failures BEFORE the incident.  Since the incident it has come to light that:

• The only other armed person on school grounds, resource officer Scot Peterson, hid behind a concrete wall during the rampage.

• School Security Monitor, Andrew Medina, had a long history of sexually harassing female students, all which was swept under the rug.

• Broward County Sheriff took 26 minutes to enter to the school.

• Nikolas Cruz was easily able to walk out of the school, blending in with other students and walked into a nearby neighborhood, where he was later arrested.

• After a lawsuit against the Broward County Sheriff’s Department, the school district, and Parkland High, a judge determined that NONE of these entities had a responsibility to protect the students.

You would think after all of this, those closest to the tragedy would be asking why – and how – this kind of failure is possible.  You would think that in the change they wish to see, the government would be the last place they’d be seeking it.  I mean, what makes them think anything will change?  History shows it won’t and it doesn’t, and, in fact,  nearly every mass shooting the US has seen government failure like this exist behind it.

Even last summer during a counter protest Rally for our Rights held while March for our Lives was staging a “March on the NRA”, a conversation afterward between myself and the organizers of the other event resulted in agreement that these failures exist, and that before we discuss new laws, we should be discussing why our current laws are failing.

What is the solution?  We need to acknowledge our society has a violence problem and a suicide problem, but to call it a gun problem is disingenuous.  To create gun control laws that disarm and effect only the law abiding is a false sense of security.  Mental health is a strong component of this issue.  Any individual who will walk into a school and execute students is mentally ill, even if not previously diagnosed.

We have soft targets in schools such as Parkland, where someone like Cruz can simply wander in with nothing in his way, and not one person inside the school is legally given the ability to defend the students they care for as their own.  Programs such as FASTER Colorado provides no cost or low cost intensive training to school staff who voluntarily choose to be armed and is approved by their school board.  They are also provided with deep concealment training, trauma training, and psychological training.

In the end, we will never eradicate evil, but we can defend ourselves from it.

On another episode of “Things Anyone Can Say On Twitter” gun control proponent, David Hogg, recently tweeted: “Congress ought to create a federal tax on gun sales to fund gun violence research.”

Congress ought to create a federal tax on gun sales to fund gun violence research.

For someone who cares so much about laws, and creating new laws (even while current gun control laws are failing at the fault of the government), Hogg himself fails to understand there are currently laws in place that would make it illegal for tax money to be used to fund research into what he calls “gun violence”.

In fact, it is illegal for the arm of government responsible for researching risk and prevention, the Center For Disease Control, to use funding to advocate for or promote gun control.  This is due to 1996’s “Dickey Amendment“.  Most recently, in March, 2018, President Donald Trump addressed the Dickey Amendment in his $1.3 trillion spending agreement, but did not include a change in funding.  Instead it clarified that the CDC can conduct research into gun violence, but cannot use government appropriated funds to do so.

But this brings to question, what would the CDC find if they did unbiased research?  They might find that while gun crime is going down, public perception believes otherwise. 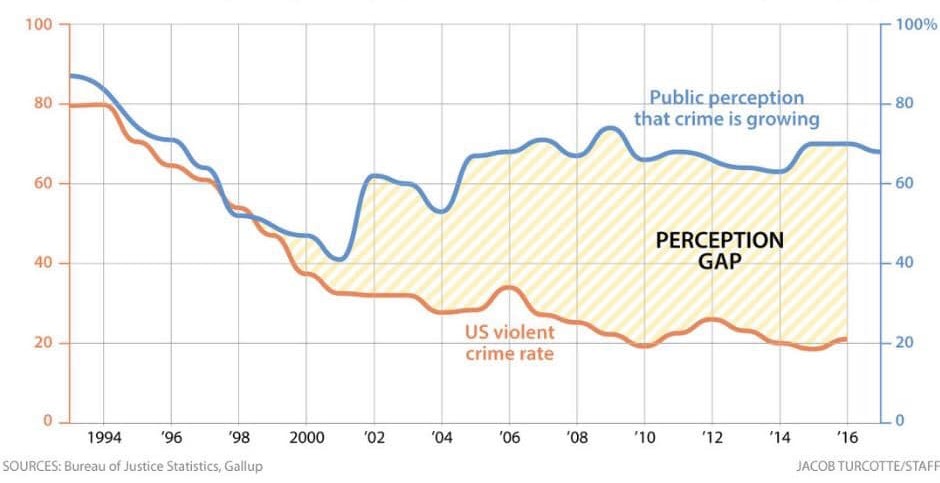 David Hogg rose to fame along with fellow classmates as they politicized the February, 2018 Parkland High School shooting and used it as a platform to call for stricter gun control under the guise of March For Our Lives – an organization that works under the umbrella of the Michael Bloomberg’s Everytown for Gun Safety.  Since it’s inception, some of Hogg’s classmates have left the movement citing a change of heart when actually talking with gun owners and gaining a better understanding of why they those choose to own firearms.

So, Mr. Hogg, before you continue asking for government to make more and more laws, I’d suggest you learn more about the ones that we currently have on the books.