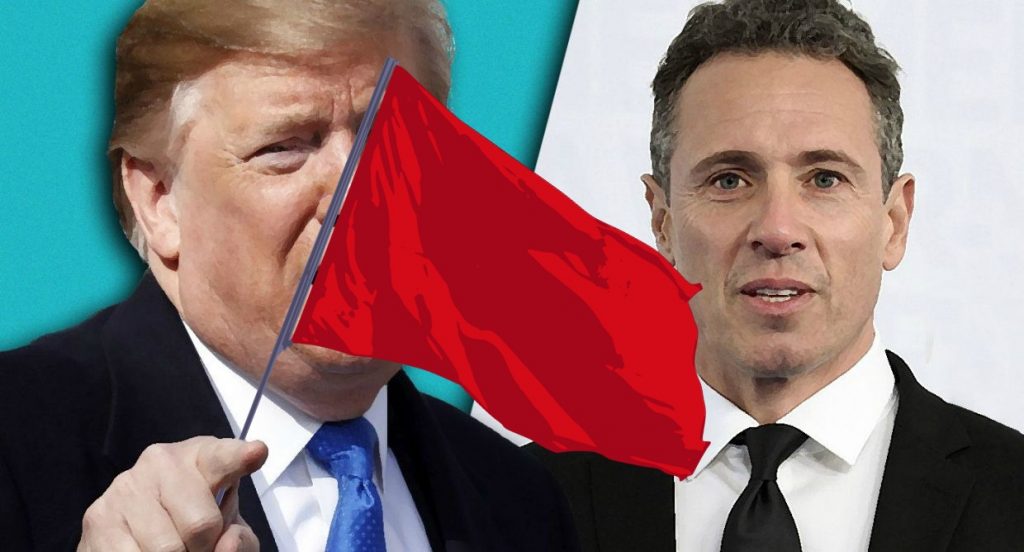 In the wake of two tragic public mass shootings, one of which the National Gun Violence Memorial actually honored the perpetrator as a gun violence victim, calls for knee jerk gun control legislation has been front and center on both the left and the right.  Prominent Republicans such as President Donald Trump, Congressman Dan Crenshaw, and several senators are calling for “Red Flag” Extreme Risk Protection Order ERPO laws.

And now, after Colorado passed an atrocious “Red Flag” ERPO bill in 2019 – a bill that passed by only ONE vote in the hyper-partisan Democrat controlled legislature with every Republican and three Democrats voting against it – we might be looking at Colorado becoming a blueprint for the whole country, a very terrible idea.

Then yesterday I woke to this tweet from President Donald Trump: “Would Chris Cuomo be given a Red Flag for his recent rant? Filthy language and a total loss of control. He shouldn’t be allowed to have any weapon. He’s nuts!”

Would Chris Cuomo be given a Red Flag for his recent rant? Filthy language and a total loss of control. He shouldn’t be allowed to have any weapon. He’s nuts!

I, just like millions of others, had to hunt down exactly what Trump was talking about.  And I did.  Here’s what happened:

A man in New York approached CNN’s Chris Cuomo and called him “Fredo”.  Watch the video for the exact exchange, but here’s a snip…

Cuomo: “You’re going to have a problem”
Man: “What are you going to do about it?”
Cuomo: “I’ll fuckin ruin your shit. I’ll fucking throw you down these stairs”

Now here’s where I think this gets really interesting following Trump’s tweet; Cuomo could actually get Red Flagged for this.  The criteria fits perfectly.  This is why:

1.) He made a violent threat – and even though the threat was regarding stairs, not firearms, it STILL qualifies!  Below is an excerpt from HB19-1177, Colorado’s “Red Flag” ERPO law.  You can access it yourself here, scroll to the bottom of page 8 and top of page 9.

2.) We know he owns firearms because he has stated that on Twitter in the past.  Again in HB19-1177, it states another qualification is ownership, access to, or intent to posses a firearm.  Read it yourself here, scroll to the bottom of page 8 and top of page 9. 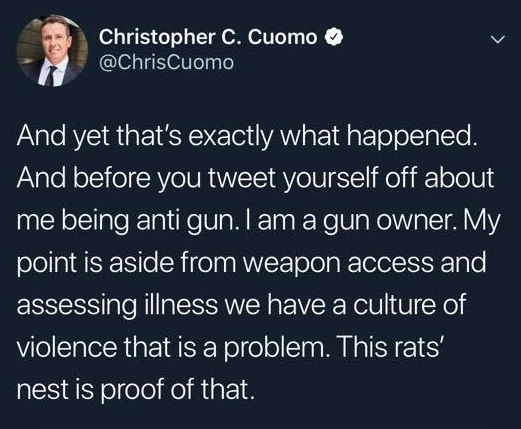 Now the person Cuomo threatened wouldn’t be able to bring forth the “Red Flag” ERPO petition (unless, of course, he wanted to state him and Cuomo had an affair in the past), but that person – or anyone for that matter – would be able to approach law enforcement and ask them to do it for him.  Or if an ex-girlfriend of Cuomo’s saw this, or maybe a live-in nanny he’d fired, they’d be able to go right to the court and file the petition themselves.

What happens next?   Well, Cuomo would get a visit from his local law enforcement agency with a temporary “Red Flag” order in hand, along with a search warrant to find all those guns he’s told us he owns.  Within 14 days, he’d be able to go to court and show the judge Trump’s tweet, and convince him or her that he is not a risk to anyone at all – even though he’d made the threats to throw that man down the stairs. If the judge doesn’t agree to return his guns, the order goes into effect for 364 days, during which time Cuomo will have one opportunity to ask the courts to get his firearms – his means of self defense – back. Of course, each time the court considers returning them, the person who brought forth the petition will be alerted and have an opportunity to ask the judge to not return them – FOREVER.

But it proves the point of exactly how poorly these laws are written, and that Trump, as misguided (or not?) as his Twitter statement was, it is 110% accurate and not hyperbole at all.

4 thoughts on “Actually, Donald Trump Could “Red Flag” Chris Cuomo – And Here’s Why”