In 2013 anti-gun elected officials in the Colorado legislature passed a package of gun control bills with the promise it would bring down violent crime and save the state from what they claimed was certain catastrophe. We knew at the time they were lying, and the most recent FBI data shows those laws have been a complete failure to help reduce violent crime. In fact, violent crime has been on a steady rise ever since the laws were enacted, reversing a downward trend.

This law expands the federal background check requirement to include private sales and adds a mental health component.

Under the new law, before any person who is not a licensed gun dealer transfers possession of a firearm, he or she must arrange for a licensed dealer to obtain the required background check. In obtaining the background check, the dealer must follow all procedures that it would follow were it transferring the firearm in a retail transaction, including recording the transfer, retaining the records, and complying with all state and federal laws.

The law also requires the reporting by the courts of persons to the NICS and CBI database who are (1) found to be incapacitated, (2) committed to a behavioral health treatment program (e.g., for substance abuse), or (3) involuntarily certified for short-term or long-term treatment and care for mental illness.

This law prohibits the sale, transfer, or possession of large-capacity ammunition magazines or feeding devices, which includes fixed or detachable magazines that can hold more than 15 rounds of ammunition among other things such as shotgun shell limits.  A through description of the ban can be found here.

This law directs the Bureau to impose a fee for performing an instant criminal background check pursuant to state law. The fee amount cannot exceed the total amount of direct and indirect costs the Bureau incurs in performing the check.

The bills were signed into law by then Governor, John Hickenlooper.  Hickenlooper is currently running for senate against sitting Senator Cory Gardner who is up for reelection in 2020.  Hickenlooper has even gone as far as to praise the laws and the impact they have had on the state of Colorado.  I have no idea what he is praising.  The new laws also spurred the 2013 successful recall of State Senator Angela Giron and then Senate President John Morse.  Another recall attempt resulted in the resignation of former State Senator Evie Hudak.  The resignation was a strategic move by the Colorado Democrat Party to prevent losing a third senate seat.

But have these laws impacted violence in Colorado?  Our research team scoured the most recent FBI crime reporting data to get a better picture. The results were stunning.  Not only has crime not decreased as was promised, it’s increased – and drastically.  The following charts were put together based on the data provided by the FBI. 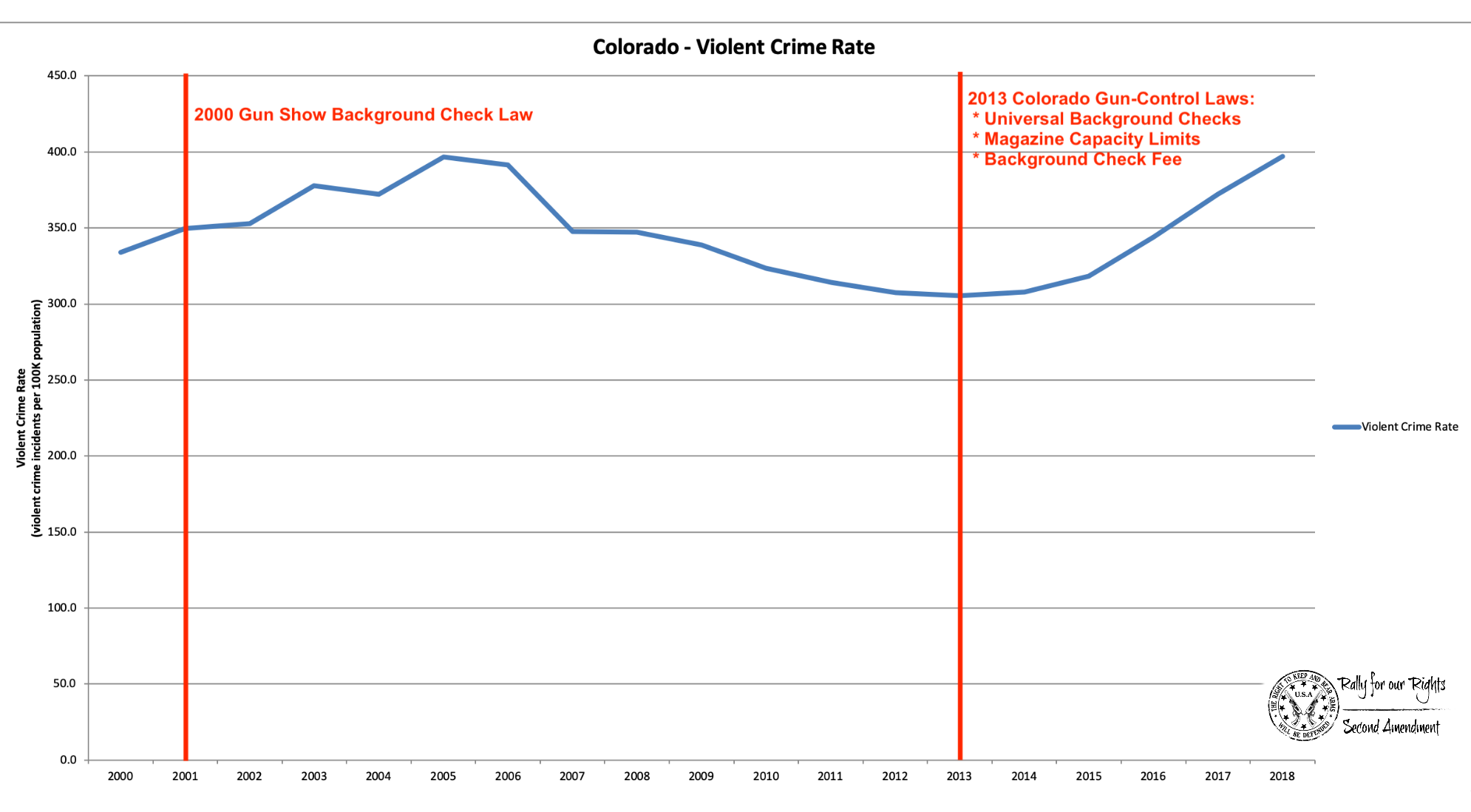 These following two charts show the overall murder rate year over year, as well as trends.  While these show the murder rate was rising before the 2013 laws (0.20 murders per 100K per year, between 2010-2013), since the laws passed it’s been rising 30% faster (0.26 murders per 100K per year, between 2014-2018). So not only did the laws not reverse nor even slow the rising murder rate, it is rising even faster than before the laws. 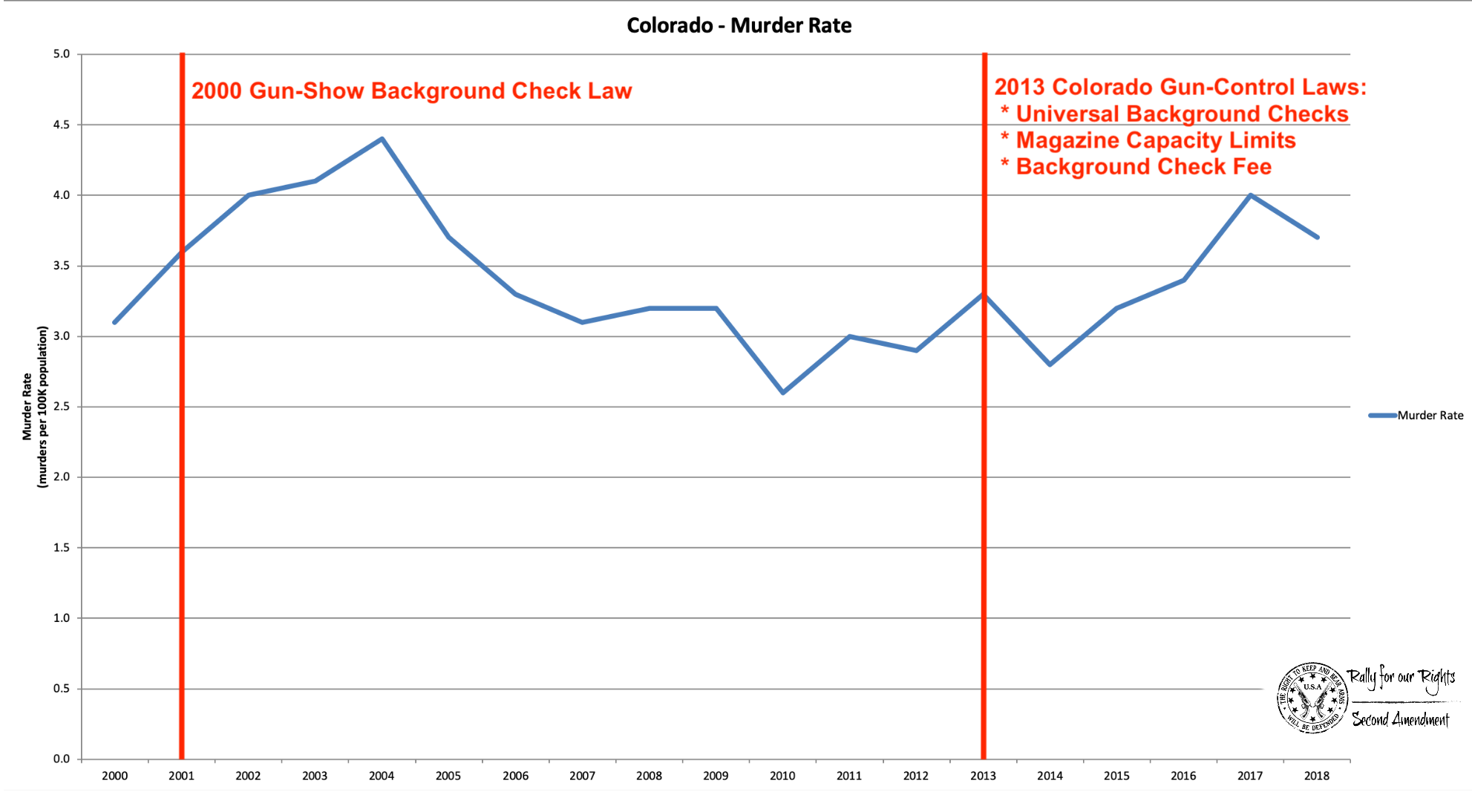 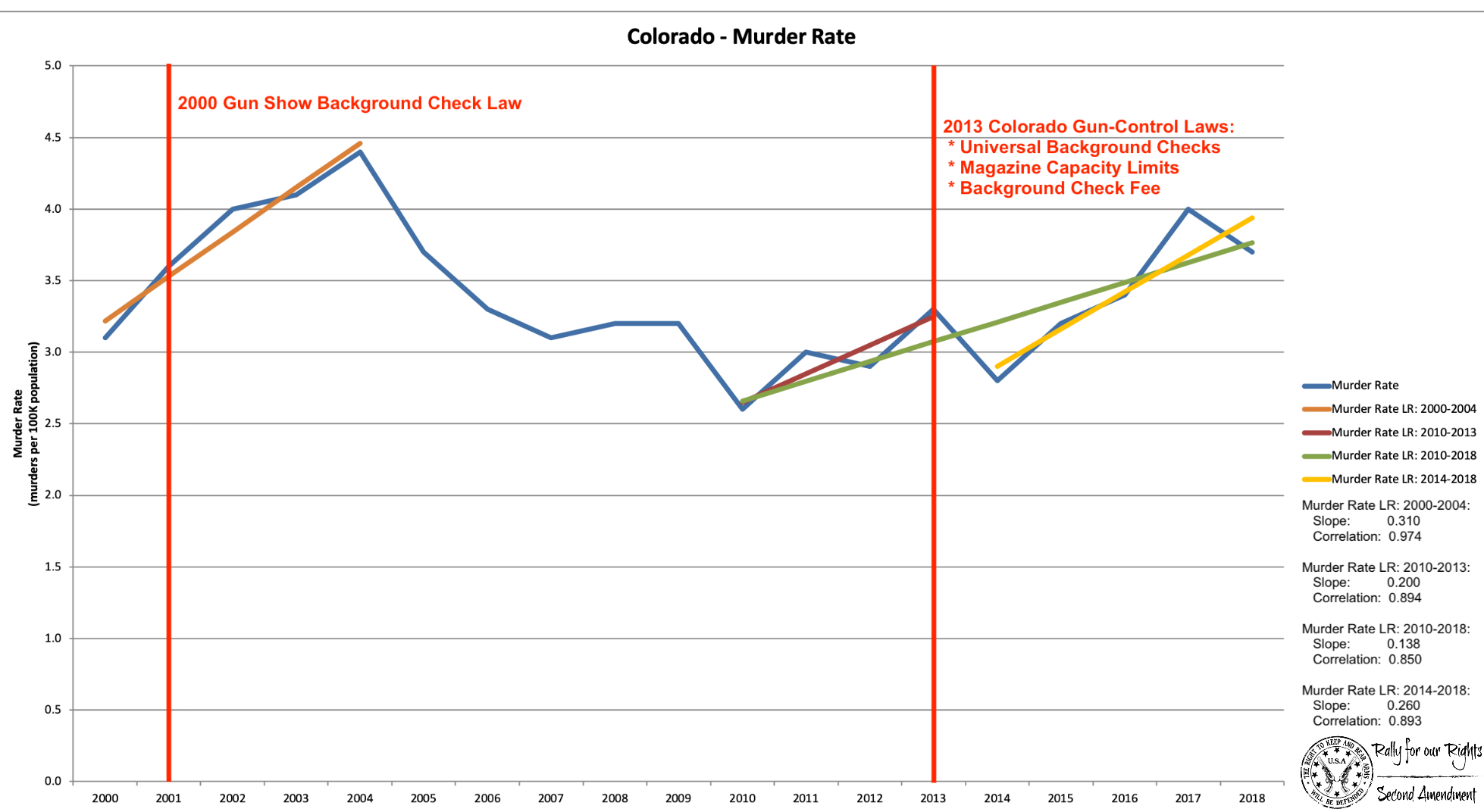 This chart below details the forcible rape rates in the state.

Note: the revised line accounts for a change made to the definition of forcible rape in 2013 to include male victims of rape  (the FBI previously only added female rape victims into their data).  The revision also clarified that any penetration without consent was considered rape, including penetration by object.  Learn more about that change here. 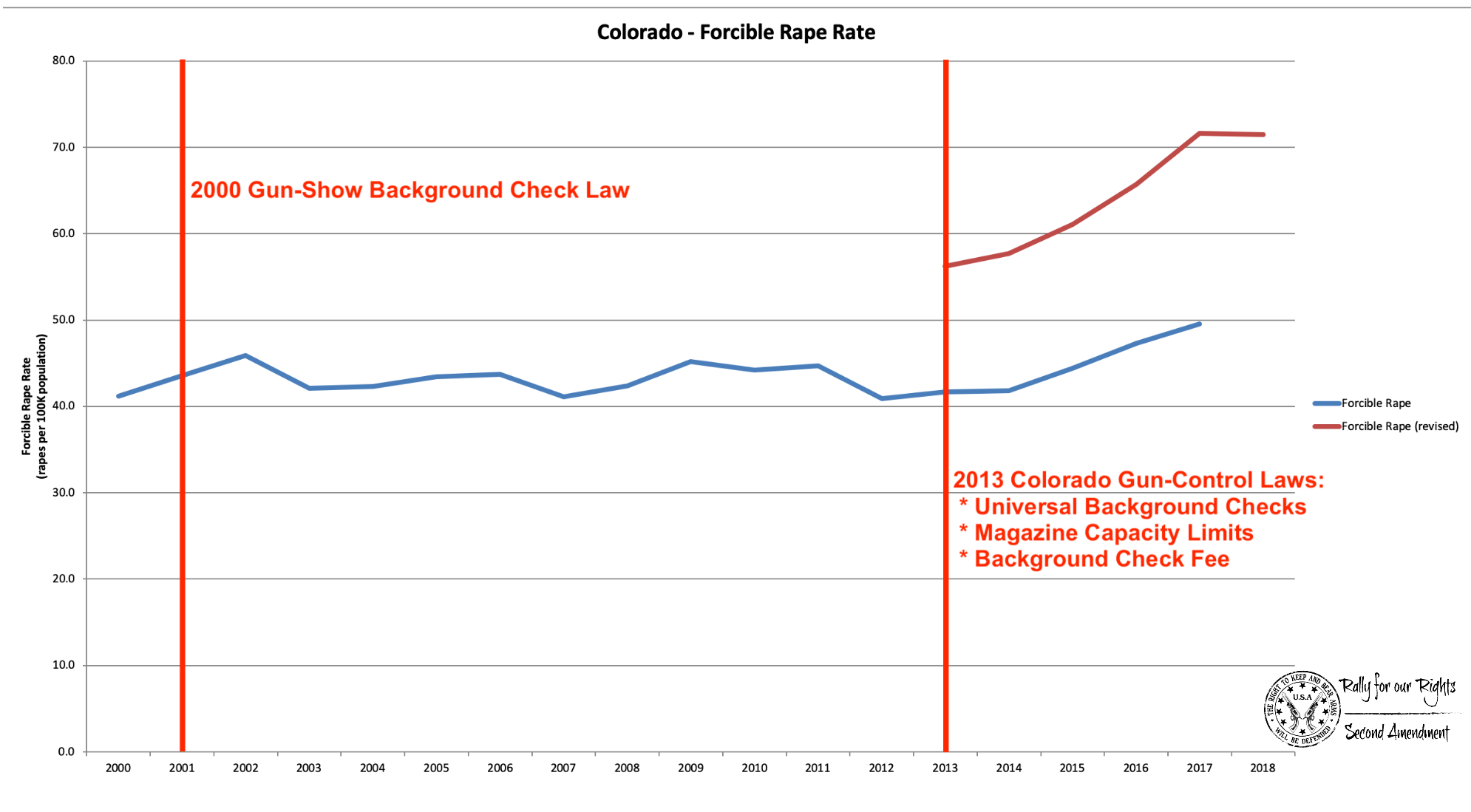 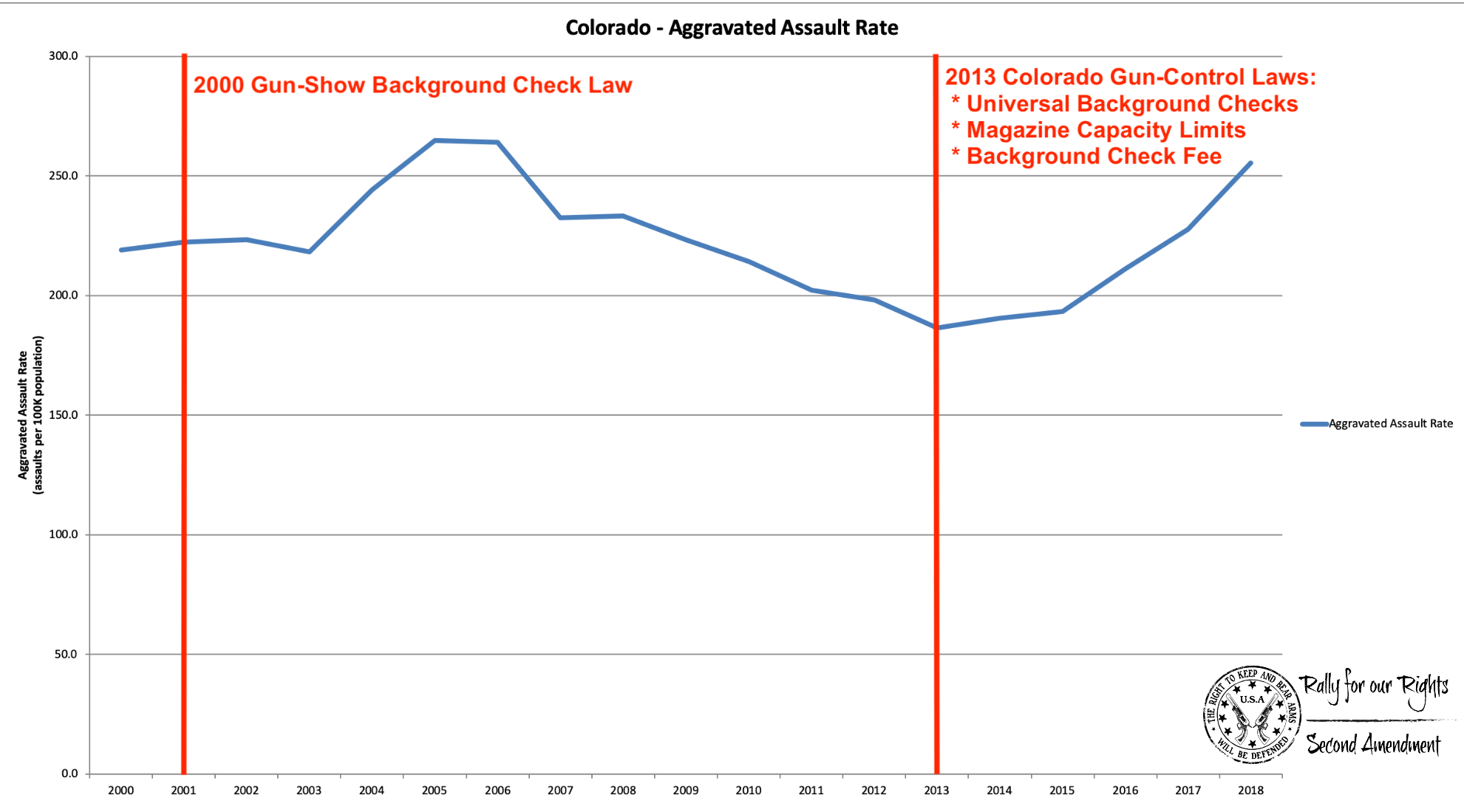 And lastly, here are the robbery stats for Colorado.  The FBI definition of robbery is the taking or attempting to take anything of value from the care, custody, or control of a person or persons by force or threat of force or violence and/or by putting the victim in fear. 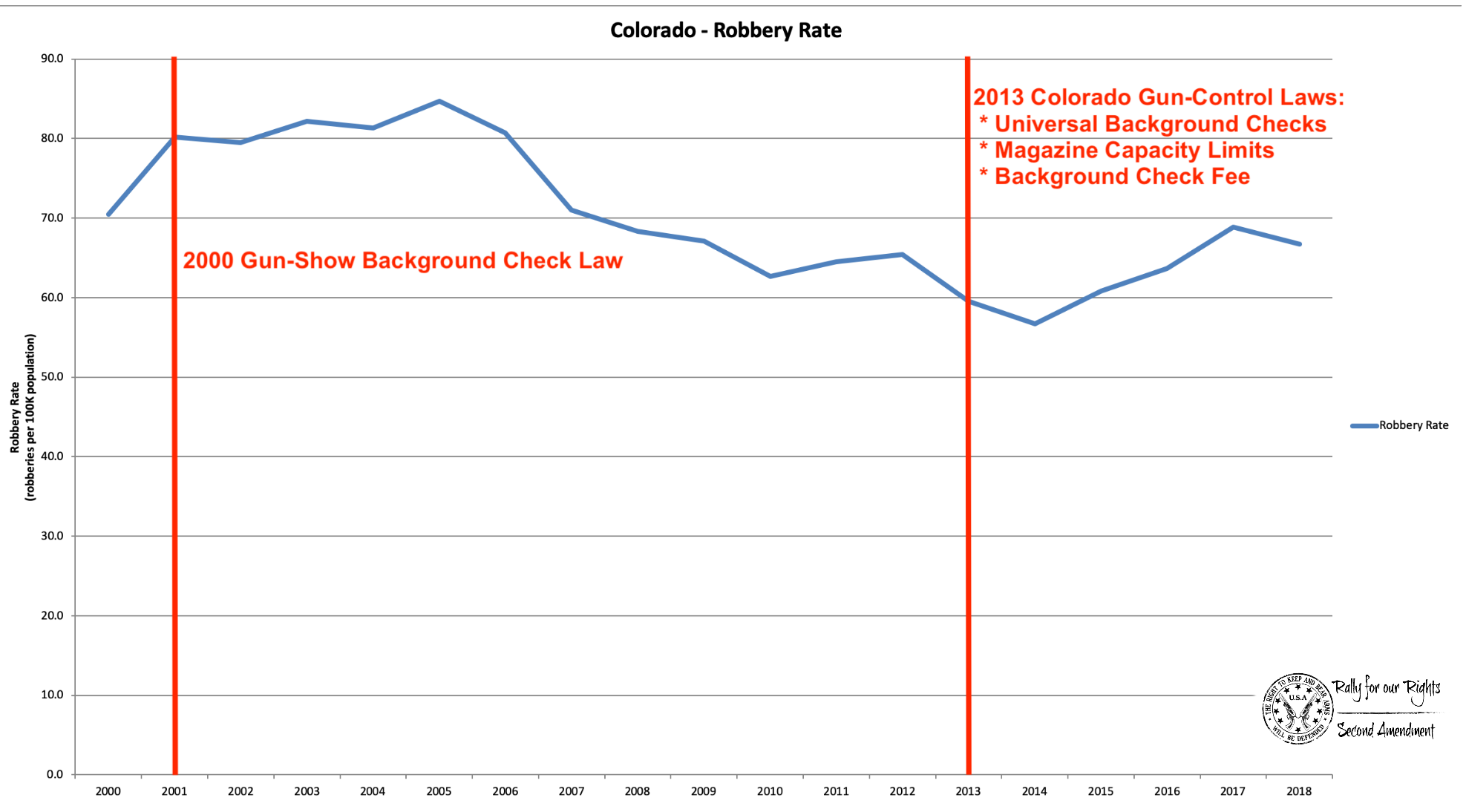 Bottom line: Colorado has a violence problem and gun control has done nothing to curb it.  Until we address the root cause of the violence, it will continue to escalate no matter how many laws are made to restrict the tools a violent person may use.