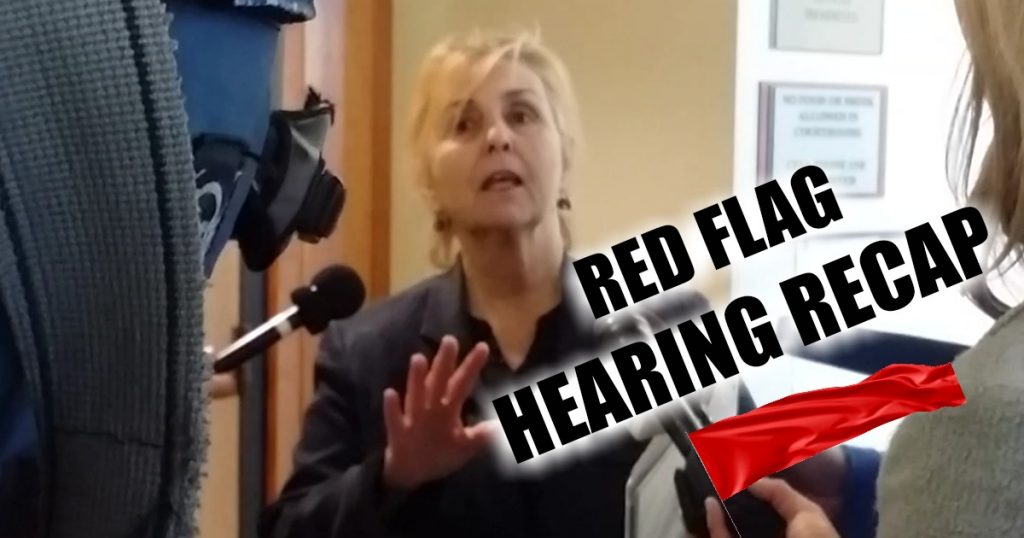 Today I attended the Red Flag ERPO hearing of CSU Police Officer Phillip Morris. Susan Holmes is the woman who filed the petition requesting that Morris’ firearm rights be suspended and any firearms he owns be confiscated. Holmes claimed her and Morris have a child in common which would qualify her to file against him. They do not have a child in common based on what you’d think “child in common” means, but turns out there is no legal definition of that term and it can be argued many ways.

In 2017 Morris shot and killed Holmes’ 19 year old knife wielding son (11 1/2″ bayonet hunting knife). The shooting was deemed justified, and I have watched the bodycam footage and I do agree with that assessment.

Susan Holmes discovered a loophole in Colorado’s Red Flag ERPO law that allowed her to bypass the initial Temporary ERPO hearing. The way it’s supposed to work is a Temp hearing would be scheduled within 24 hours of her filing, where the judge would determine based on a preponderance of evidence if the facts on the petition were true or not, and he would either approve or deny the Temp ERPO order. Had Susan Holmes gone through this Temp hearing the case would have more than likely been denied based on her claim they had a child in common (but who knows). Turns out it doesn’t matter.  This law is so poorly written, if you think you will be denied at the Temp hearing because, say…you lied, you can just bypass it and go right to a full hearing forcing the person being ERPO’d to fight back or risk losing their firearm rights. It doesn’t matter how frivolous any of it is.

The Attorney General’s office sent two of their attorneys to represent Officer Morris, dismissing the attorney who had been appointed to him. I wonder if the AG would do the same for me if I was fraudulently ERPO’d? I won’t hold my breath.

Susan Holmes did not have any legal council with her at the hearing.

Larimer County Sheriff Justin Smith refused to serve the petition on Officer Morris calling it a fraud. It was a fraud, but would he also not serve me if I claimed an ERPO on me was a fraud?

The hearing began by the AG’s attorneys who were representing Officer Morris waiving service since the sheriff was refusing to serve Morris. This allowed the hearing to proceed.

Susan Holmes had filed a motion asking the judge to recuse himself based on his history of overseeing cases she was involved in. I’m still not clear what those cases were. The judge denied the motion.

Susan Holmes then stated “I do not recognize you as a judge or your ruling” and she accused him of judicial misconduct. Judge told her she could appeal his decision and/or file a formal misconduct complaint with the court.

Judge was actually really patient with her and thorough in everything he did. Kudos to him because even though this fraud makes a mockery of the court system, this is what happens when the legislature passes laws against the wishes of law enforcement who deal with the courts. You end up with laws that turn the court into a circus, and it’s the judges job to see that through no matter what, and this judge was going to do just that.

Holmes was then given the opportunity to present evidence and call witnesses to make her case for the removal of Morris’s firearm rights and the confiscation of his guns. She refused based on the fact she wouldn’t recognize the judge.

Judge turned to Morris’ attorneys from the AG’s office and invited them to present evidence and call witnesses. They began by stating this should have first gone through a Temporary ERPO hearing. Judge stopped them and said no, because that wasn’t the way the petition was filed. This is a permanent hearing. They then begin to argue that there is no standing for Holmes to file the petition because they do not have a “child in common” (although attorney was stumbling over the definition because there really isn’t one). A sworn affidavit from Morris was filed stating he does not have a child with this woman.

Holmes was given the opportunity to respond and make her case for what she believes “child in common” means. Judge asked: “Do you want to address if you have a child in common?” Holmes: “I don’t recognize you as a judge.”

The judge regularly had to read right from the ERPO law to try to make sense of what he was supposed to do.

Judge ruled he cannot find by clear and convincing evidence that they do have a child in common, mainly because Holmes won’t present evidence, so the ERPO was being denied based on her not having standing to file. Holmes can appeal and get a different judge. Holmes last statement was that she was appalled that the AG had stepped in. I was a little bit too. The AG called people like me who said this law could be abused “paranoid” and didn’t care if we were collateral damage.

Holmes started demanding an amendment be added to the ERPO that allows citizens to directly ERPO law enforcement.

I told media this makes it obvious how easily ERPOs can be used maliciously, and if these were average citizens and not a police officer in a high profile case, would the sheriff refuse to serve the petition and would the AG come to the defense? Absolutely not. We’d be on our own – defenseless.

Colorado’s Red Flag ERPO law had been in effect for 9 days when Holmes filed, and this is the 5th ERPO in the state. This is going to be a bumpy ride.