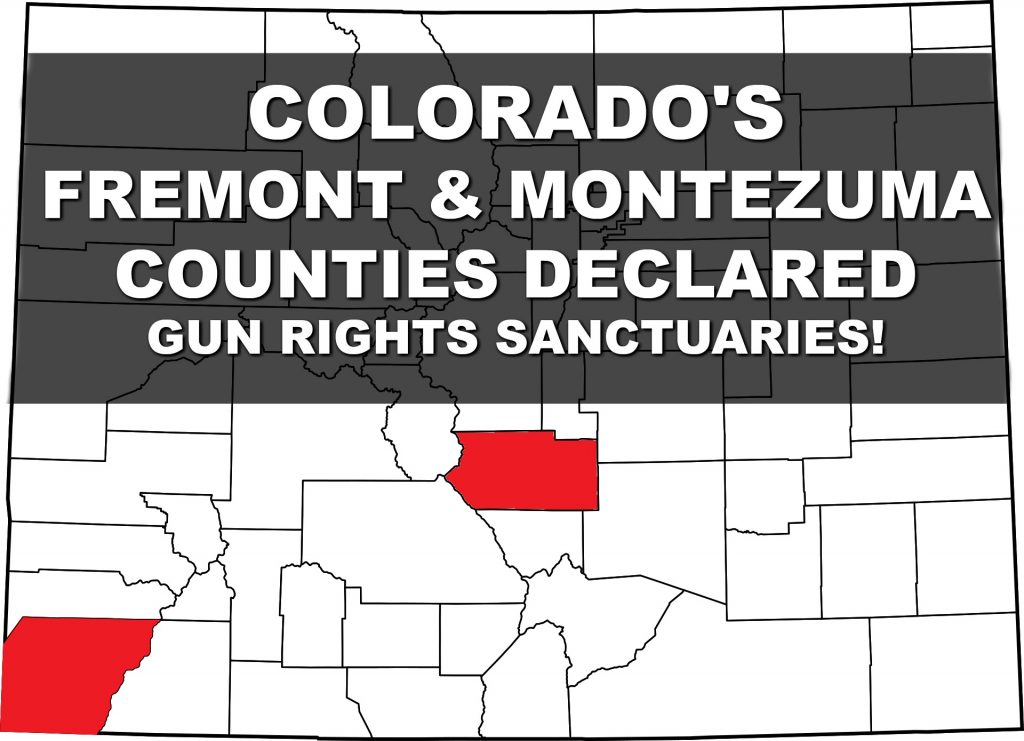 Early Tuesday February 26th, two separate Colorado counties voted to declare themselves Second Amendment Sanctuary counties.  Both Fremont and Montezuma counties held their regular Board of County Commissioners meetings and either passed or started the process to pass resolutions stating if Colorado’s HB19-1177: Emergency Risk Protection Orders (ERPO) is passed into law, they will not enforce it.

HB19-1177, which is Colorado’s proposed Red Flag gun control legislation passed the House Judiciary Committee last Thursday after nearly ten hours of testimony for and against.  Dozens of those wishing to testify in opposition to the bill had already left when they were called up to testify at 9 and 10 o’clock at night.  Many of those who were not able to speak had been there since noon.

In Montezuma County, more than 100 people attended and many shared their comments about the Red Flag legislation being considered.  The Board of County Commissioners were said to be transparent and shared a copy of the resolution with those in attendance indicating the county’s position against a Red Flag ERPO law, calling it a dangerous infringement on the Second Amendment and civil liberties.  Montezuma County Sheriff, Steve Nowlin, was also in attendance and supported the resolution.  The final draft of this resolution will be discussed in a Special Meeting on Thursday, February 28th at 6:30 p.m. The public is invited.

Many other sheriffs in Colorado — including El Paso County Sheriff Bill Elder, Weld County Sheriff Steve Reams, Teller County Sheriff Jason Mikesell, and Fremont County Sheriff Allen Cooper — say they don’t approve of the bill as written because they believe it infringes on citizens’ rights to due process. Even Democrat Sheriff out of Pueblo County, Kirk Taylor, says he doesn’t believe there are adequate due process protections for gun owners in this year’s version of the bill.

Colorado’s proposed “Red Flag” legislation is one of the worst the U.S. has ever seen. This year’s bill is being called an “Emergency Risk Protection Order” or ERPO in an attempt to lose the negative “Red Flag” reputation.  It is also being pushed more than ever as being about suicide prevention.  Don’t let any of it fool you.  The devil is in the details; it’s in the 30 pages of bill language.  You can read a complete break down of these 30 pages here, as well as watch a video going through the language line by line.

• This bill is being touted as a “suicide prevention” bill, when in fact, the fear of having your firearms confiscated will make people terrifed to ask for help when they need it.

I attended the hearing last week to testify in opposition to this bill.  I arrived at noon and was the very last person to be called to testify – nearly ten hours later.  After listening to testimony all day, I decided rather than once again testify to how unconstitutional the bill is or how it lacks due process, I’d instead testify to my own experience having the legal and judicial system used against me as an act of harassment during a 22 months custody battle.

Watch my testimony in the video below:

Ready to recall??  Sign our petition in support of recalling if and when the need arises.