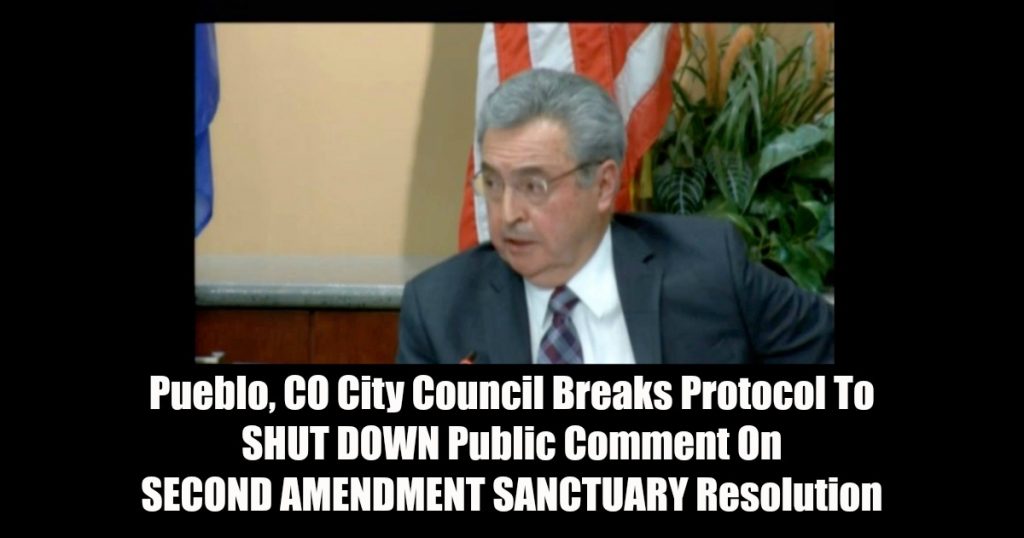 In March, during the heart of the “Red Flag” ERPO debate, Pueblo City Council Member Mark Aliff announced he would be presenting a Second Amendment Sanctuary resolution at the March 25th regularly scheduled council meeting.  This was on the heels of over half the counties in Colorado adopting similar resolutions, as well as many municipalities, in response to a poorly written and downright dangerous piece of legislation Democrats in the Colorado legislature were considering – HB19-1177 “Red Flag” Emergency Risk Protection Orders ERPOs.  This bill did pass by one vote with all Republicans and three Pueblo Democrats voting against it. It is awaiting the governor’s signature.

I attended the Pueblo City Council Meeting with friends from Pueblo, and I witnessed first hand a gross abuse of power via manipulation of standard protocol, effectively silencing those who were there to speak on the resolution.  It was blatantly obvious this was planned prior to the meeting and I have submitted a Colorado Open Records Act (CORA) request with the city to find exactly what went down.

Here’s a synopsis of how the meeting went:

• The announcement of the resolution came approx one week prior to the meeting.  Communication with the council member presenting the resolution told us comment on the resolution would be taken during general public comment at the beginning of the meeting.  This is standard for anything unless it is a specific hearing on an ordinance, as is outlined in council rules.

• In the past if public comment was to be taken at the time the resolution is presented, that comment is given PRIOR to the motion being moved.  In this case, they moved the motion first, then asked for a second, which didn’t come and the council president found that as terms for denial of the resolution that no one had been allowed to speak to!  This is unbelievable, as the job of city council is to act on behalf of the citizens. If they do not even allow citizens to speak, they cannot and do not represent them.

• Many people in attendance were angry.  Everyone left the room where local media interviewed people from both sides of the issue.  After attendees left, the council continued to discuss what had just happened, with the main discussion participants being the city attorney, council president Dennis Flores, and the council member who put forth the resolution, Mark Aliff.

Watch the video for yourself to see how despicable these antics were, then scroll down to learn what you can do.

Here’s what you can do:

Attend the next city council meeting and sign up to speak during public comment.  Let them know EXACTLY what you think of this power move.

Contact all city council members by email and phone.

No time to contact them all individually?  Copy/paste this email list and send your email to them all!

Get connected with Rally for our Rights on social media and donate to help keep up going and growing.