I’ve written about this disturbing “Gun Violence Memorial” website before.  A website that claims to be about honoring victims of gun violence, keeping daily stats, and allowing people to light candles for lost loved ones.  On the surface it sounds genuine, until you start digging deeper and realize they also “honor” perpetrators who are killed justifiably, whether by their victims or by law enforcement.  This website gets their information from the “Gun Violence Archive” another website which on the surface sounds honest, but again, they also count perpetrators as gun violence victims to pump up their numbers. Did you hear the recent mass shooting number for 2019 as 251?  Yeah, they got that from them.  We’ve debunked the Gun Violence Archive’s mass shooting numbers before (and I’ll be doing it again soon).  Click here to read more on that.

It should have come as no surprise to me that one of the latest “gun violence victims” listed on the Gun Memorial site is 24 year old Connor Betts, the mass murderer who killed 9 and injured 27 when he opened fire at popular nightlife area of Dayton, OH this past weekend.  Betts was killed within minutes by police – with a firearm – and because the officer used a firearm, Betts is now another stat, another “gun violence” victim that the anti-gun left is using to push their agenda.  This particular scenario is especially disgusting as they are also using the real victims as well to push for all sorts of gun control, including dangerous “Red Flag” Extreme Risk Protection Order laws. 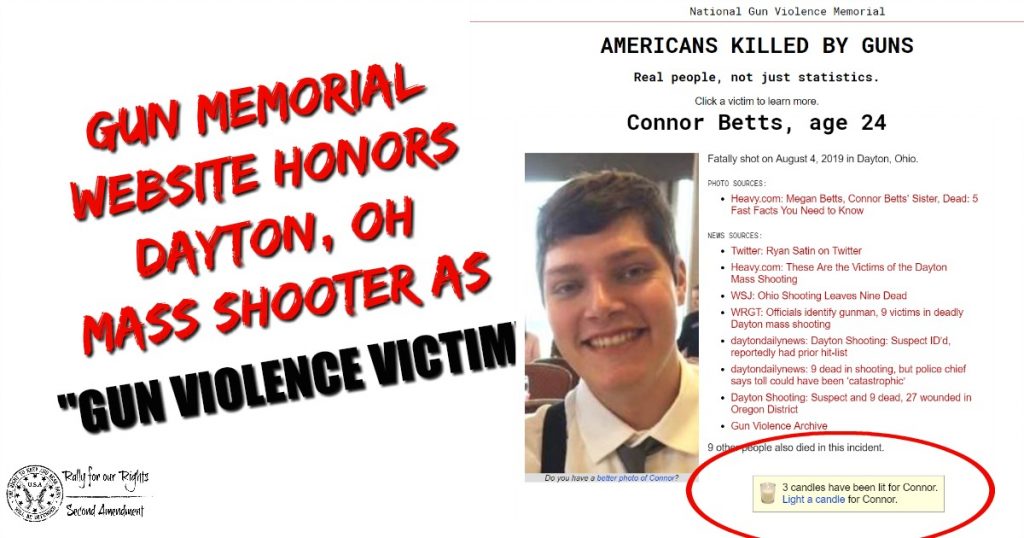 But honestly, it did come as a surprise to even me that this anti-gun group is so hell bent on twisting their numbers to fit their narrative that they would memorialize this particular evil perpetrator.  At the time of this writing, three people have already lit a candle for Betts.  And I must ask the question: does memorializing mass shooters lead to more mass shooters?

The Denver Westword often uses this same website to validate their stories about gun ownership and/or violence.  And they should be ashamed.

I wrote last year about the memorializing of a 60 year old man who was killed in self defense by a 23 year old woman while he was bashing her head into the guardrail during a Washington road rage incident.  In that instance, eventually the push back to the “Gun Memorial” site was so massive they removed him.  Good.  They should remove Connor Betts too.  In fact, they should remove anyone who was justifiably killed by firearm.  Guns also save lives.  They did for that young woman in Washington, and they did this past weekend in Dayton, OH.