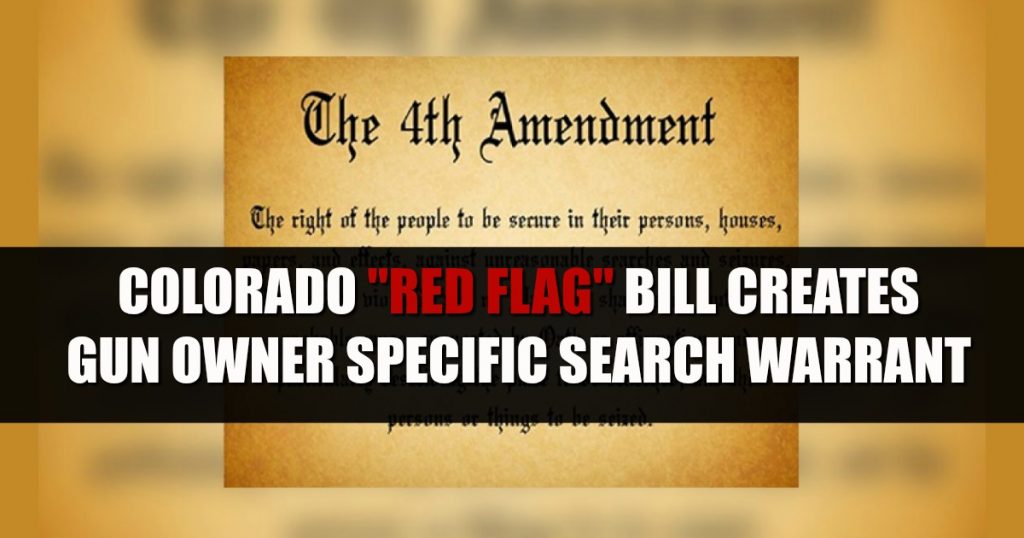 Buried deep inside the 30 pages of Colorado’s HB19-1177: “Red Flag” Emergency Risk Protection Orders bill language is one of the most frightening – and unconstitutional – aspects of the proposed legislation.  They are creating a new type of search warrant in the state that would be specific to gun owners only: a civil search warrant.  This civil search warrant would be issued along with the initial temporary ERPO, meaning the very first contact between law enforcement and the accused would be a search of the home with the goal being to confiscate firearms.

Currently, with very few exceptions, search warrants are only issued for criminal reasons.  According to mountains of existing case law, search warrants are granted by convincing a neutral and detached magistrate that they have probable cause to believe that criminal activity is occurring at the place to be searched or that evidence of a crime may be found there. Anything that strays from this definition is a blatant violation of the Fourth Amendment.

Considering ERPO’s would be issued based on accusations by a petitioner over the phone with a $0 filing fee and only requires substantial evidence, this new gun-owner-specific search warrant is more than troubling, it is downright dangerous.  Especially when factoring in who can petition the court for an ERPO, that being: a family member, a spouse, a girlfriend/boyfriend, an ex-spouse, an ex-girlfriend/boyfriend, a roommate, a former roommate, anyone the accused has been intimate with even if they have never resided together, grandparents, stepparents, stepchildren, step-siblings, and anyone in law enforcement.

The accusations can range from fear someone will harm themselves, or harm others (and not necessarily with a firearm), to simply owning a gun or talking about purchasing one.

I’ve been writing and hitting the airwaves talking about Colorado’s proposed version of a Red Flag Law extensively since the bill was introduced last month, and have said again and again it is one of the most dangerous and overreaching versions I have seen across the country.  This new gun-owner-specific civil search warrant is part of the reason.  Nevertheless, I decided to research if any other states have anything similar tied in with their Red Flag laws, and came up empty handed.  In fact, during my research into civil search warrants, the only examples I could find of them were with intellectual property, and even then they require clear and convincing evidence in order to be granted.  HB19-1177 only requires substantial evidence to have the warrant issued, and it is not intellectual property being seized – it is real property that is constitutionally protected under the Second Amendment.

So, what’s the difference between “Substantial” and “Clear and Convincing”?

Substantial Evidence: Substantial evidence is “such relevant evidence as a reasonable mind might accept as adequate to support a conclusion.”  This level of evidence is often used in administrative cases such as DMV hearings, or determining unemployment benefits.

Clear and Convincing:  The clear-and-convincing-evidence standard goes by descriptions such as “clear, cogent, unequivocal, satisfactory, convincing” evidence. Generally, this standard is reserved for civil lawsuits where something more than money is at stake, such as civil liberties.

Scary stuff, right?  THIS is why nearly half the counties across Colorado have declared themselves Second Amendment Sanctuaries, with their sheriffs leading the way.  Most county sheriffs read this bill and say “No Way”.  They understand how unconstitutional it is, as well as how dangerous the outcomes can be for both those being accused and law enforcement officers who will be expected to raid someone’s home based on the same level of evidence needed to approve an unemployment application which can be presented by a scorned lover over the phone for $0.

Fourth Amendment to the United States Constitution: The right of the people to be secure in their persons, houses, papers, and effects, against unreasonable searches and seizures, shall not be violated, and no Warrants shall issue, but upon probable cause, supported by Oath or affirmation, and particularly describing the place to be searched, and the persons or things to be seized.

What else is so bad about this bill?  Well, nearly everything.

This year’s bill is being called an “Emergency Risk Protection Order” or ERPO in an attempt to lose the negative “Red Flag” reputation.  It is also being pushed more than ever as being about suicide prevention.  Don’t let any of it fool you.  The devil is in the details; it’s in the 30 pages of bill language.  You can read a complete break down of these 30 pages here, as well as watch a video going through the language line by line.

• This bill is being touted as a “suicide prevention” bill, when in fact, the fear of having your firearms confiscated will make people terrified to ask for help when they need it.