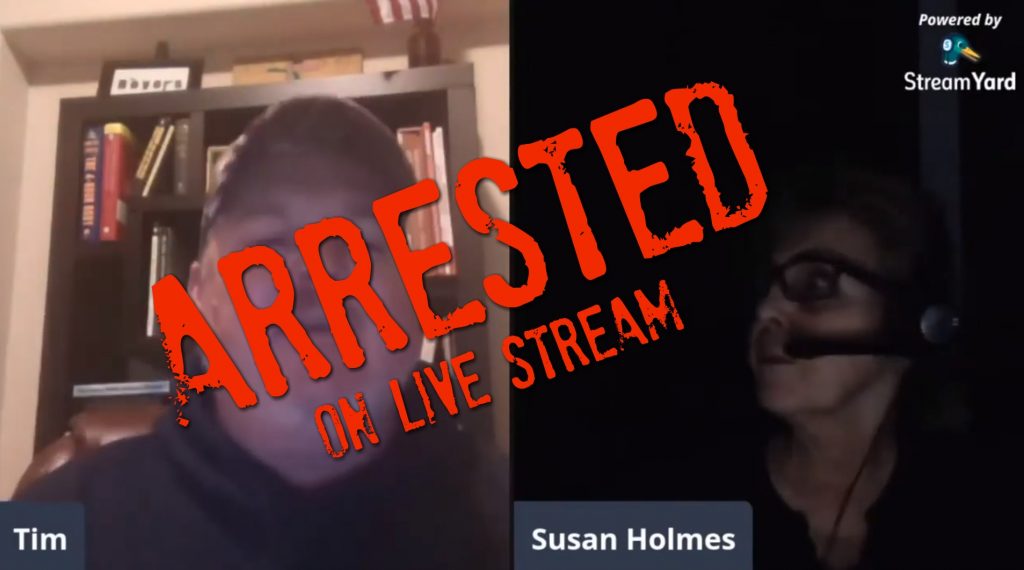 Susan Holmes has been arrested and it happened during a live stream with YouTuber “timmybmn”.  For over 20 minutes, on the uncut version of the video, Holmes discussed her son’s case as well as Red Flag laws.  The entire time police can be heard outside.  Eventually they break into her home and arrest her while still on the YouTube stream.  The arrest occurs approx at the 10:40 timestamp in the video below.

Nine days into Colorado’s atrocious Red Flag ERPO law being on the books, Susan Holmes made national news by filing a petition against a police officer who killed her mentally unstable knife wielding son in 2017.  On the petition Susan claimed her and Officer Phillip Morris had a child in common, which made her a qualifying person.  “Child in common” has no definition included on the petition.  She live streamed the filing of the petition on her YouTube channel.  You can watch that here.

Holmes managed to find a loophole in the law that allowed her to skip the Temporary ERPO hearing where the petition likely would have been denied at the door, and go right to a Permanent ERPO hearing instead.  This meant a full hearing where both parties were required to be present and both parties would have as much time as needed to present their case. This hearing was a circus and was denied in the end.  We were there and you can read our recap here.

On January 23, 2020 the Larimer County DA issued an arrest warrant for Holmes and even added her to the county’s Most Wanted list.  Her charges? Perjury and Attempting to Influence a Public Servant.  According to Larimer County Sheriff Justin Smith, the Perjury charge was based on the false statement on the petition, and the Attempting to Influence a Public Servant charge was because her end goal was to have a judge grant an Extreme Risk Protection Order on Officer Morris.

Let us know your thoughts on this latest development in the comments.  Do you think if a civilian had a fraudulent Red Flag ERPO filed against them, the person who filed the false petition would be receiving the same treatment as Susan Holmes?