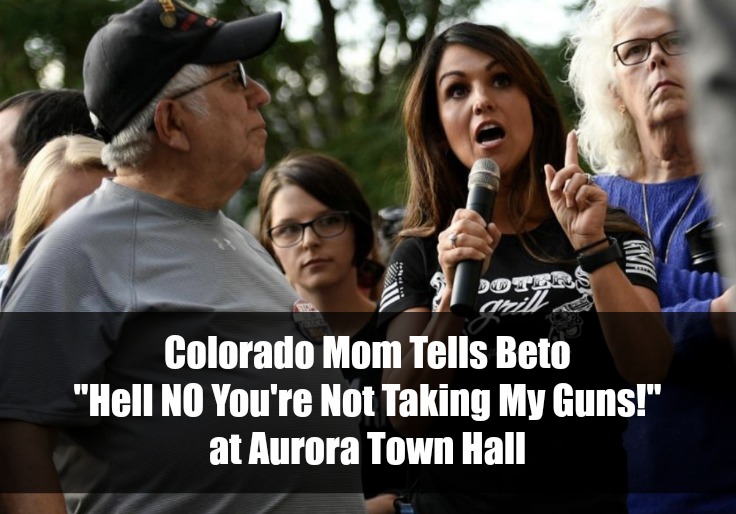 Lauren Boebert drove three hours from Rifle to Aurora, Colorado for one reason and one reason only – to tell Democrat Presidential Beto O’Rourke “Hell NO, you’re not taking my guns” and she did.

The town hall was held Thursday, September 19th on the lawn of the Aurora Municipal Center to a small crowd of a few dozen people, many who attended in opposition of Beto’s proposed gun control.  During the last democratic presidential debate Beto made headlines when he stated “Hell yes, we’re going to take your AR-15!” and immediately released a line of campaign t-shirts with the new slogan on them.

Lauren is a mother of four and owner of Shooters Grill in Rifle, Colorado, a restaurant where you will regularly see staff open carrying and patrons are welcome to carry – open or concealed.  She took Beto to task on everything from his desire to disarm the law abiding to his criminal past.

She also brought up why her and staff began open carrying in their restaurant – a man was beaten to death in the alley nearby.

“He lost his life that night, and it kinda shook me up. I was there alone a lot and I thought, ‘what am I gonna do, what am I gonna do if something happens, what if somebody comes in here, my husband isn’t here to protect me, I’m all alone,’ and really, that’s what got me to open-carry,” she said.